Save Max to your Collection. Register Now! 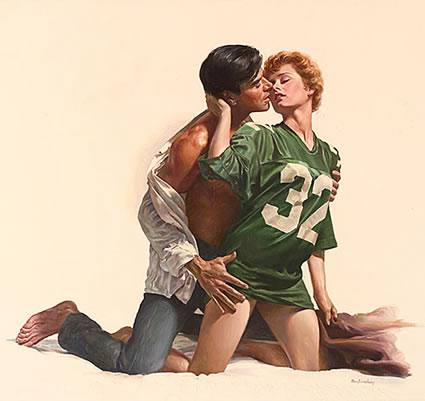 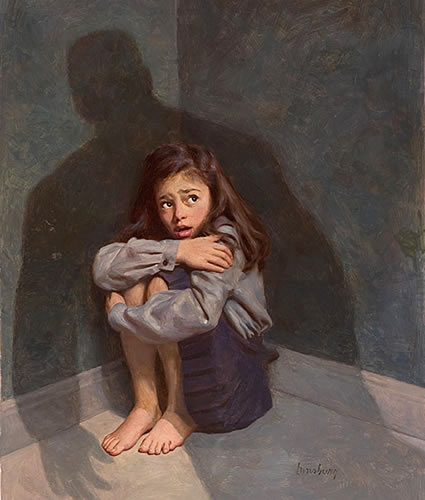 When Max Ginsburg entered the art world in the 1960’s, he was working in direct opposition to the period’s minimalism and rejection of representational art. Ginsburg’s fine art reflected and represented his immediate environment: cart vendors, subway riders, street basketball and generally the people of New York, depicting them with unflinching clarity and dignity. He approached this subject sympathetically if unromantically, with his primary motivation being visual truth rather than idealization.

Ginsburg quickly discovered he had a propensity for the genre. His work went on to grace the covers of over 800 titles–far a field in their variety—ranging from John Knowles,” A Separate Peace”, to Pamela Pacotti’s, ‘Winds of Desire”. His romance illustrations appealed to readers’ wishes for exploration or escape: his buxom women were determined and intoxicating, their men handsome and strapping, the settings vast and promising of adventure. When working with revered authors like Mildred Taylor, his empathy and skill combined to produce tender depictions of friendship or family ties in the face of gross social injustice and random tragedy.

Ginsburg’s artistic skill placed him in high demand, thus he enjoyed a successful twenty-four year career in illustration, only retiring from the field in 2004 to concentrate again on his fine art. His list of achievements in the field is impressive: Gold Medals from the Society of Illustrators, the Romance Writers of America “Art Emis ” Award, the highly acclaimed ‘Christopher Award”, the Art Directors Club ‘Merit Award”, The Society Of Newspaper Design’s ‘New York Times Cover Award” and a one man retrospective at the Franklin Mint. Clients included the New York Times, New York Magazine, Fortune Magazine, Avon, Penguin Putnam, Harlequin, Bantam, Dell, Crown, Pocket Books, Berkley, Leisure, Dial, Puffin and Warner Publications. In addition, Ginsburg is featured in Walt Reed’s preeminent reference volume, ‘The Illustrator in America”. His work can be found in the permanent collections of the New Britain Museum in Connecticut and the Society of Illustrators.

Show all reactions
"I have recently acquired 3 sybil ross kleiman paintings - they are exceptional - one appears to be einstein and the other one I have not identified - the third is of nude women in lily ponds - if anyone can assist me in establishing the identity of the male subject in the unidentified painting or has any idea of values of sybil ross kleiman paintings I would greatly appreciate it - rclinftl@hotmail.com"
"I have a drawing of a nude that you did in approximately 1968. It was purchased for me at a NCY gallery because the model resembled me. Are there other of these early works of yours around? Is there any value or interest in them?"
"these are sweet i feel like jumping into the painting and saving the little girl."
"Hmm. Good question."
"Keep up the good work! :)"
"Hmm. Good question."
"Keep up the good work! :)"
"I wonder is this the same max ginsburg that taught at the highschool of art and design during the late 70's into the 80's? the style looks exactly the same. I lost touch with him and Greenberg. Both were great influences in my development as an artist. I would love to know if this is the same person and if there is any way for me to contect him or find out."
"Belle illustration de l'agresseur...bon sujet et mon traitement pour la deuxime.."
"Sybil Kleiman is a very accomplished artist and a good friend of mine. It is so interesting that she is now working on a painting in her series, "entrapped", which has the same subject as your very dynamic work. She is too modest when she says her painting doesn't measures to yours. You have both dealt with a very sensitive and tragic situation which needs to be more aggressively addressed in our society. I was very moved by your piece, and appreciate your making the statement and the very fine quality of your work!" 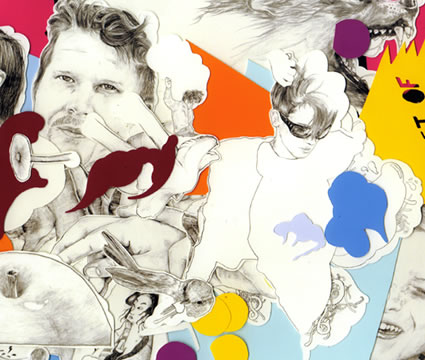 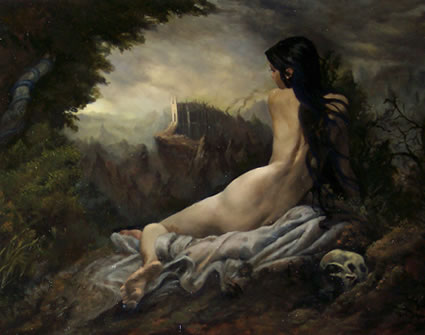