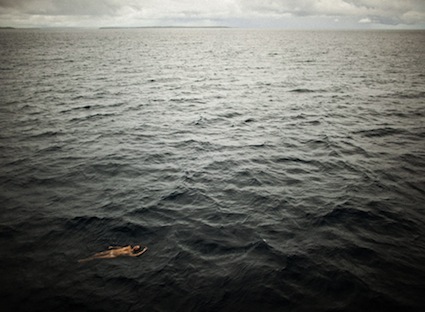 Keegan Gibbs was born into a family of artists and raised by the sea. He derscribes his photography as a method to express his love of ‘all things salt water.’ Since he graduated film school several years ago, Gibbs has spent a lion's share of his time surfing, taking photos, and shooting videos.…

"I found both of these images really interesting and wanted to see more of Keegan's work. After reviewing his entire website, though, I have to say that these images don't seem to representative of his"

"MY REVIEW pic a; mankind, mustering the unlimited force of nature from a seemingly insignificant portion of rest. pic b; bargain for the photons of light by two elements"

"The mirror-image clouds on water photograph is gorgeous. I feel balance inside, looking at it. Composition's terrifically done. The single woman in the sea: My first THOUGHT was 'The shore has to b"

"The horizons in both paintings indicate different distances from the zooming lens of the viewer...the first almost imperceptible; almost like some of the blurry foggy strokes on the second painting. a"

1 other artists from Malibu, CA